I’ve been driving to Goodison every other week for 11 years now, and having now been to plenty of other grounds, it can’t really be beaten for parking. (Well…maybe matched by Anfield of course!) Stanley Park car park is pricey and takes an eternity to get out of but is always available. For a few seasons, I parked at North Liverpool Academy, just around the corner from Stanley Park on Utting Avenue, but the school has now closed. Car park is still there  but a bit pricey. There is a fair bit of free parking on Cherry Lane (though check the signs, as it is mixed in with residents parking) if you get there early enough. Quick getting away too. 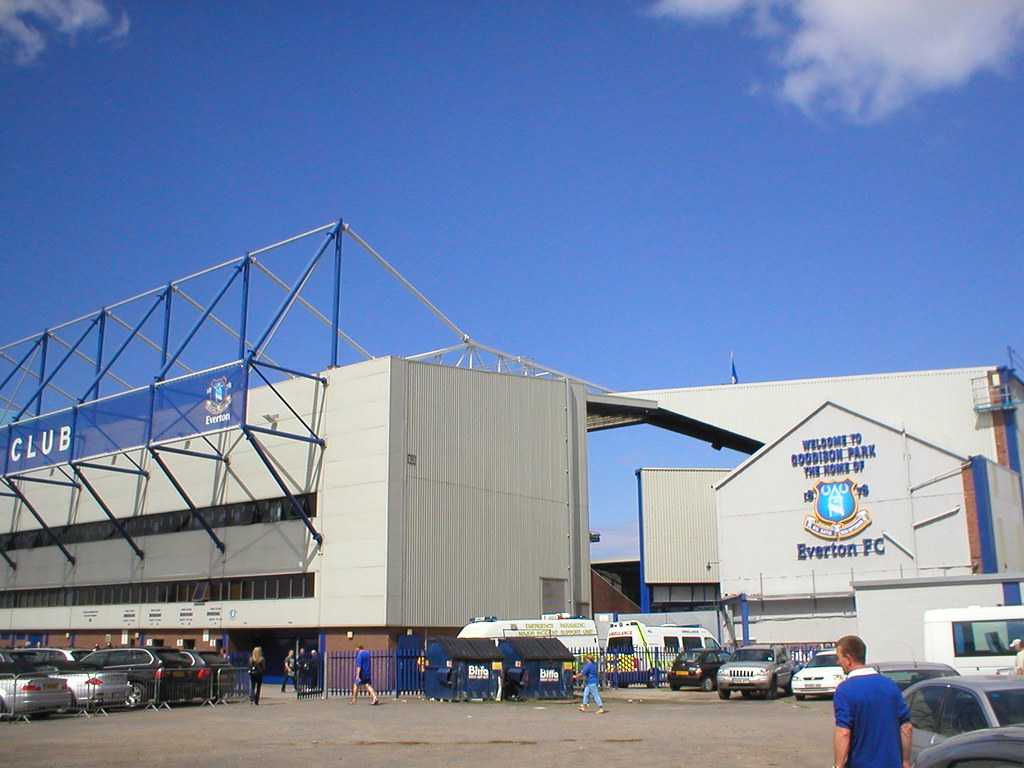 Outside the Park End against Arsenal, 2004

Another habit I’ve had to change lately! Got chips and gravy from the Dug Out on Goodison Road every week for years, but it shut down a while ago. Worked my way up the other Goodison Road chippies at each game to find a new favourite, and Ive found it at last! Chips and curry, or chips and gravy from the Goodison Supper Bar across the street from the church…you will not be disappointed! The Dug Out has now reopened, but sadly the Goodison Supper Bar stole me away during it’s brief hiatus! As a result of such fine offerings outside the ground, I haven’t ate inside the ground for a couple of seasons. There is a decent chippy/ cafe on County Road too if you cut through the side street opposite the corner of the Main Stand and Gwladys Street.
As for pubs, despite the closure of the Blue House a few years ago, you will still struggle not to get a drink outside Goodison. The Spellow and the Winslow are just outside the ground and always fine for away fans, or you have the choice of literally hundreds on County Road five minutes away…the Royal Oak is the only one awayers are advised to stay away from, but even then, there are never problems there unless its a rival. 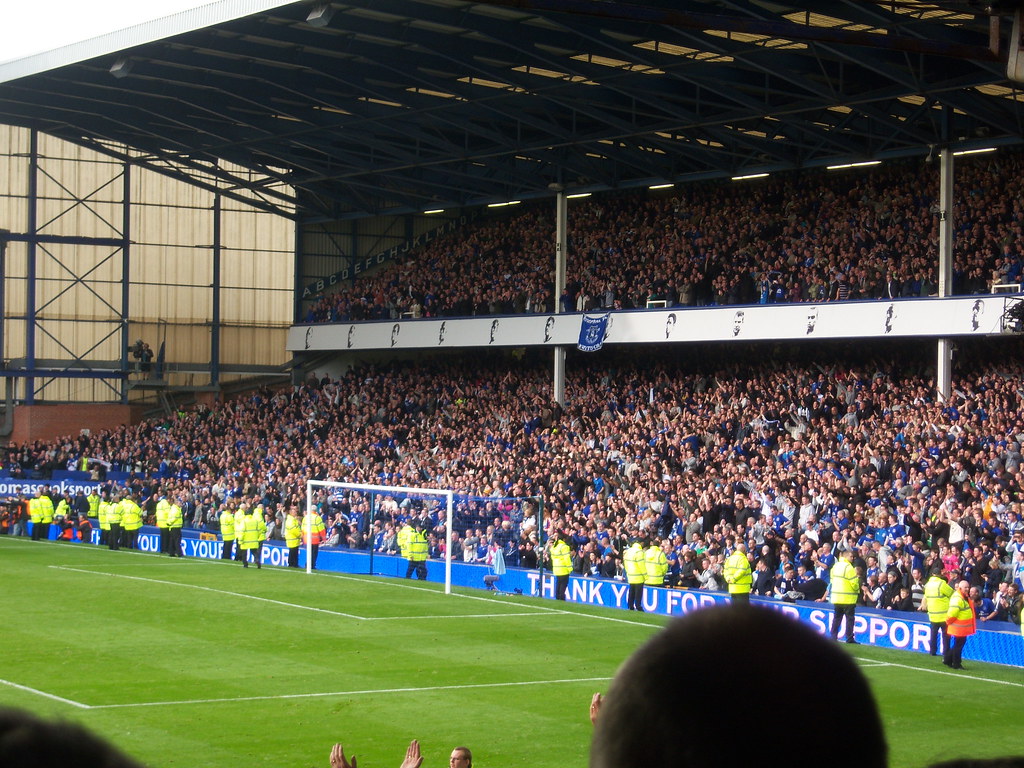 No point in sugarcoating it for away fans…the Bullens Road is not the most pleasant away experience you’ll ever have! I have my season ticket in the same stand, and as much as I love the place, I can recognise how bad it can be!
If you’re going for tickets, get the upper if you can, then the Paddock. Avoid the lower at all costs! It’s where I sit, but then it’s cheaper by far than the others, as well as the fact I have my own seat so I know what obstructions to expect. The view really is a lottery as far as the pillars go. The upper has pillars as well, but not as many and the view is excellent. Ditto the Paddock, it’s obviously unobstructed being at the front, but of course can be a bit low and get you wet!
I’ve sat all over the ground, the Family Enclosure and Top Balcony being the only areas I’ve never sat. I’ve even sat in the Press Box once on placement! The pillars are simply a fact of life all over the ground, except the Park End. But it’s strange, the Park End is my least favourite place to sit. Despite the fact the views are totally unobstructed, they try to cram in as many seats as possible so as a result, it’s very cramped and uncomfortable. I’ll stick to my nice wide and warm wooden seats in LB4 thanks!

View from the Main Stand press box for a pre season game with Malaga, 2009

I’ve seen Goodison at it’s best and it’s worst. At our best, it is easily one of the most aggressively supportive grounds in the country. That’s what I’ve always loved so much about the atmosphere when Goodison is rocking. A great Goodison atmosphere isn’t about singing a variety of jolly songs about how great we are, it’s about raw hostile aggression, scaring the crap out of the opposition, but inspiring to our own players. Millwall and Birmingham are the only other two grounds, possibly Sheffield United too, which have a similar kind of atmosphere. Man United at home in 2005 and the second leg against Fiorentina in 2008 are far and away two of the greatest atmospheres I’ve ever been involved in, (the FA Cup games at Wembley sneaking in there somewhere too) and I am yet to hear a home crowd that has come close to matching any of those two.
On the other hand though, the fact that it’s our aggression that makes us, that can often make for a terrible atmosphere against lesser opposition. A large majority of our fans can be overly demanding to the point of perfection, that one misplaced pass can shatter the confidence of anyone but the strongest players. As such, we also love a scapegoat, which frustrates the hell out of me. Currently it’s Aiden McGeady who is the favourite scapegoat, while it has seen the likes of Beattie, Bilyaletdinov and Kilbane doomed to fail from the start in the past.
Goodison is one of very few grounds I’ve seen against so much opposition, I know before the game even starts sometimes what kind of atmosphere we’re going to have. For those normal games, if there’s anything that lifts the crowd…it’s a shocking ref. The 1-0 win over Blackburn in 2006 being one of the best atmospheres in recent years, and it all stemmed from a terrible ref and perceived injustice.
Oh, and the other thing that gets Goodison going? A tackle…I’ve never known any set of fans that can get so up for a game just as a result of a good hard tackle. Neville on Ronaldo, David Unsworth putting Steve Finnan into the Paddock one year with a crack that could be heard all over the ground, Kilbane on Ronaldo in the opening second of that win over United in 2005…love a good early tackle. 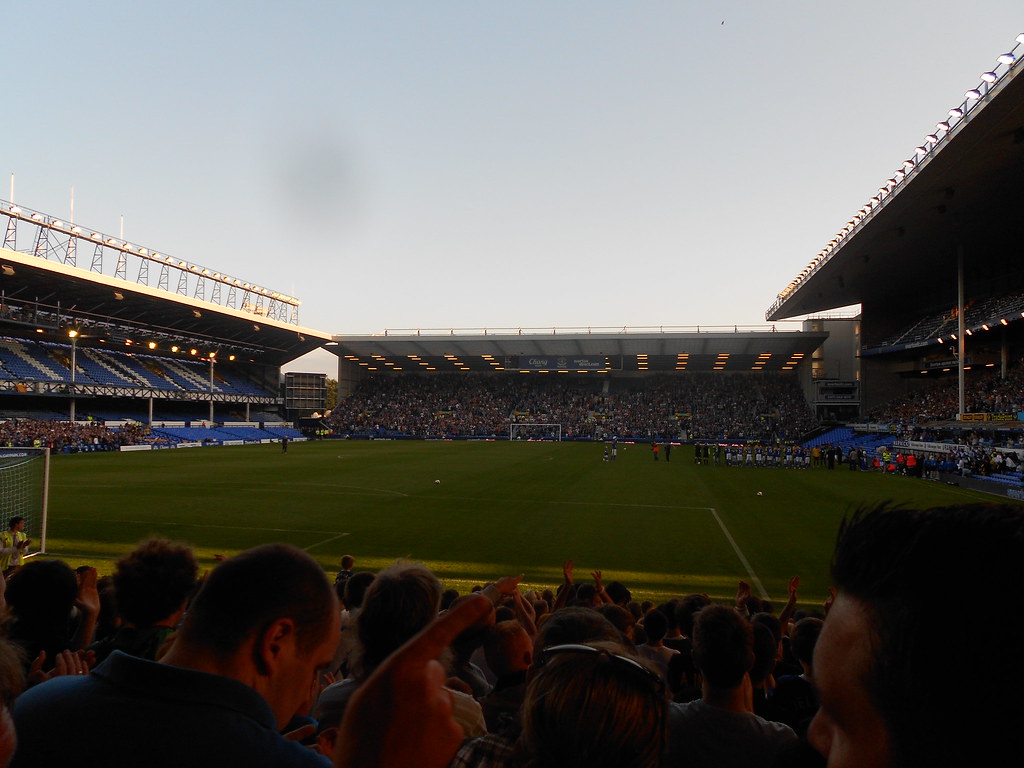 View from the Lower Gwladys, pre season 2012 against AEK Athens 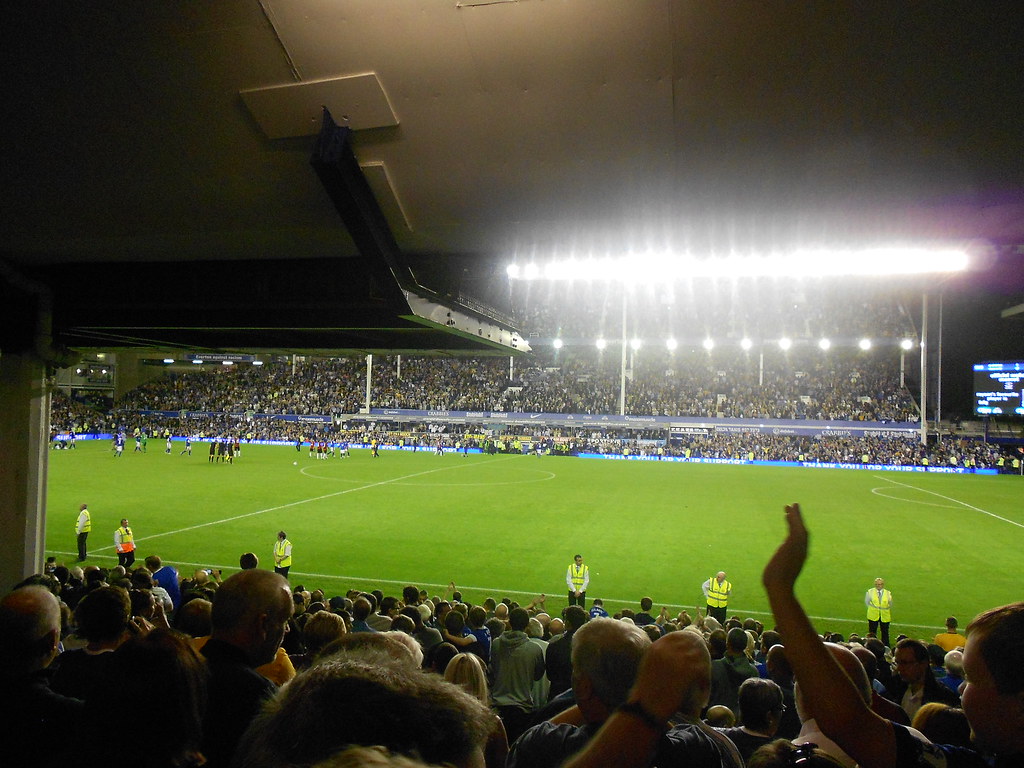 The Main Stand under the lights at the end of a memorable win over Man United, 2012

You’re never going to get a completely impartial view of Goodison from me to be honest! I know and love it’s flaws, but recognise it can be a less than anticipated trip for away fans. For anyone who grew up with grounds like Goodison, it’s still one of very few of the real old school left in the top flight these days. Would hate to see it go.
Goodison Park Photos
Posted by Unknown at 04:07