Horrific, the absolute worst away journey in the history of football. Travelled with the club on a coach, purely because it was the cheapest way and I got a ticket included. Never ever again. We only had one driver, so had to keep stopping (has anyone else ever been on a 38 hour coach trip with just one driver?) the ferry was cancelled meaning we had to sit around in Dover at 4am where the shop was shut and wait an hour and a half for the next one, the toilet on the coach blocked before we even reached Birmingham and the driver refused to empty it (sink didn’t work either). Then after all this, when we got there, we were dumped in the city centre (fair enough so we could go and have a few drinks and all that) and told where the bus stop was without ever being told which bus we get, which direction, and even how long it takes! Luckily, the Belgians and the police were a bit more helpful. Completing the fun, was the fact that our coach didn’t have a TV or even a radio, so 28 hours of near silence and boredom ensued, and the heat couldn’t be switched off, ensuring a very sweaty and uncomfortable 2 days for anyone on the window seat. Never ever again. If I ever have to take a coach to an away game ever again, it will be a billion years too soon. 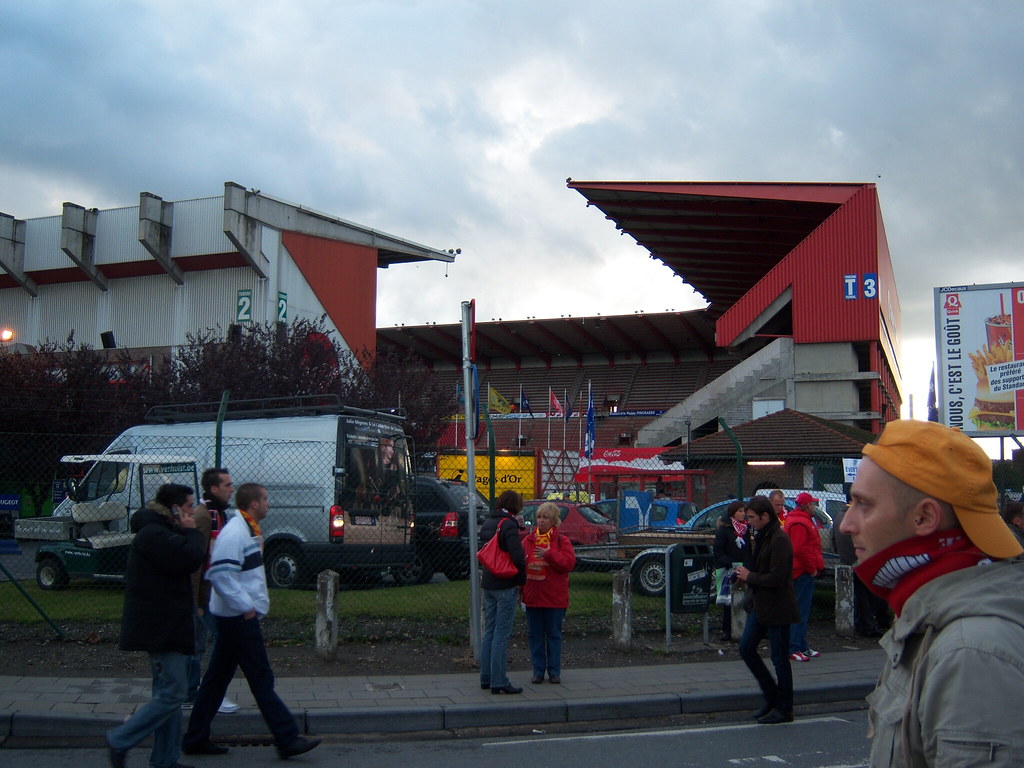 Nothing. One pub and a couple of burger vans. Luckily we were warned in advance and stayed in the city centre for most of the day. 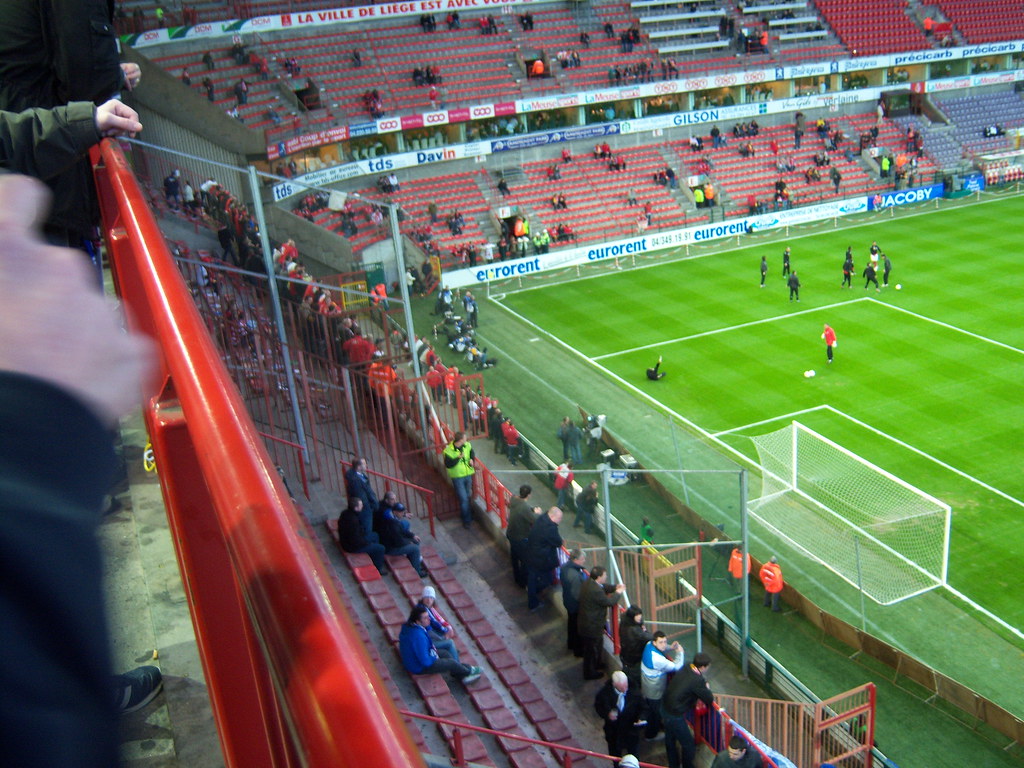 The sickening view looking down from the third tier!

Awful. Its size is impressive, but its facilities dreadful. We had tickets in the very steep 3rd tier behind the goal. It was so steep we couldn’t even see the goal at our end of the ground. The fact that the seats were those flat ones with no backs built into the steps meant it was even more dangerous standing up and people were falling down all over the place. I had planned on getting a burger or something to eat before the game, but the height and the steepness of the stand made me lose my appetite pretty quickly, I’ll never complain about Newcastle again! Most of the seats didn’t have numbers either, so people were standing anywhere they wanted. The toilets took the mickey, the only toilets in the away end were in the 3rd tier, so unless you were already in your seat in the top tier and was nipping down, it wasn’t exactly feasible to ‘nip the loo.’ Added to the fact that the toilets were blocked and ankle deep in water when we arrived anyway, they weren’t much use. Liege’s solution was 2 portaloos, which were effectively holes in the ground and no handwashing facilities, and for the men, a four side portable urinal, plonked in the middle of the area where all the food and stuff things were by the ‘turnstiles,’ and in full view of everyone! Does it get any more degrading? The police in town were helpful enough when we were getting the bus to the ground, but otherwise, they were very unpredictable. Teargassed a pub full of Everton fans in town after the game, were nowhere to be found when it all kicked off in the pub next to the ground before kick off. The stewards in the away end were mostly ours who had travelled over, but there was absolutely nobody organising the chaos in the seated bits, as hardly any of the seats had numbers and people were just stood all over the place. Accident waiting to happen the 3rd tier. 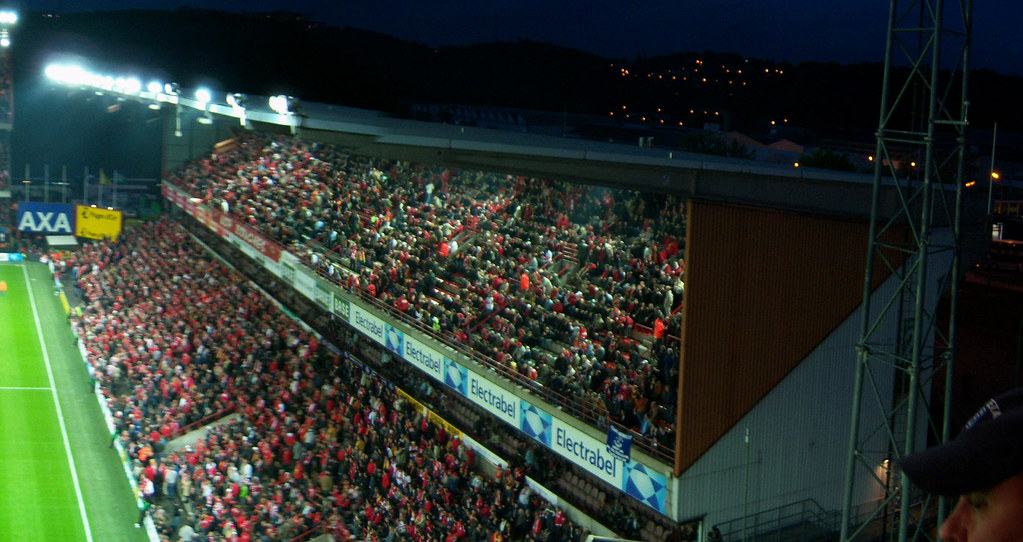 Just about the only redeeming feature. Liege fans were great all through the game, we had a good time in town all day, but there was always a bit of a moody edge. We were poor during the match though, was great for a while after we equalised, but once we came to realise it was a false dawn, gave up. The team deserved nothing less 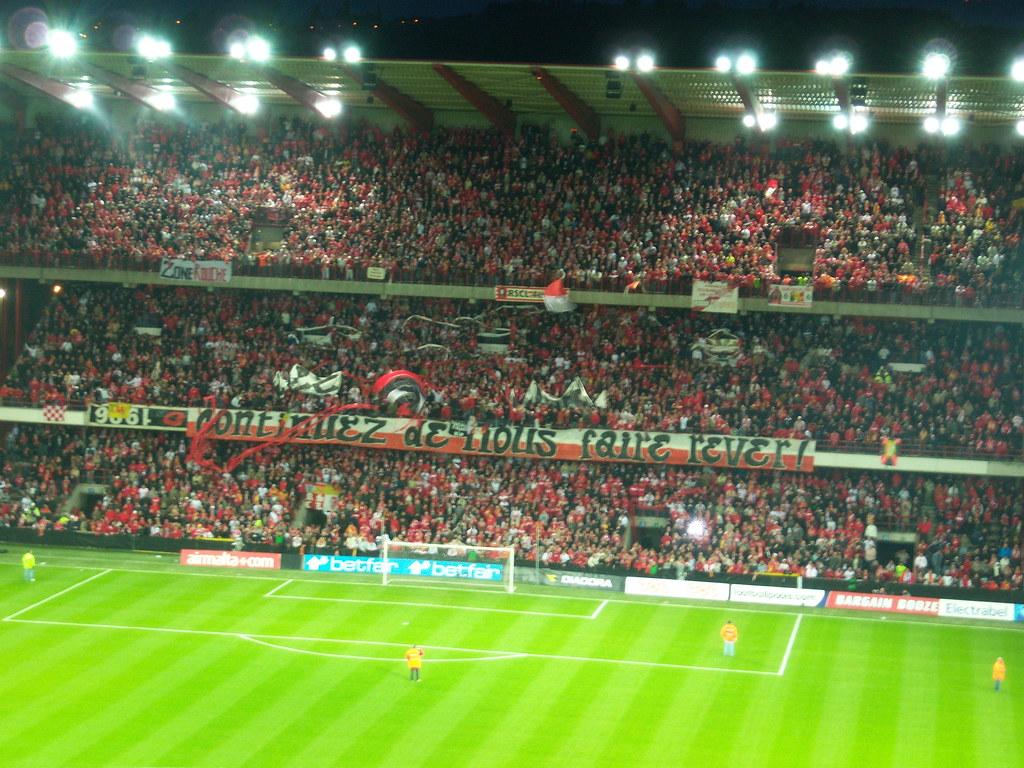 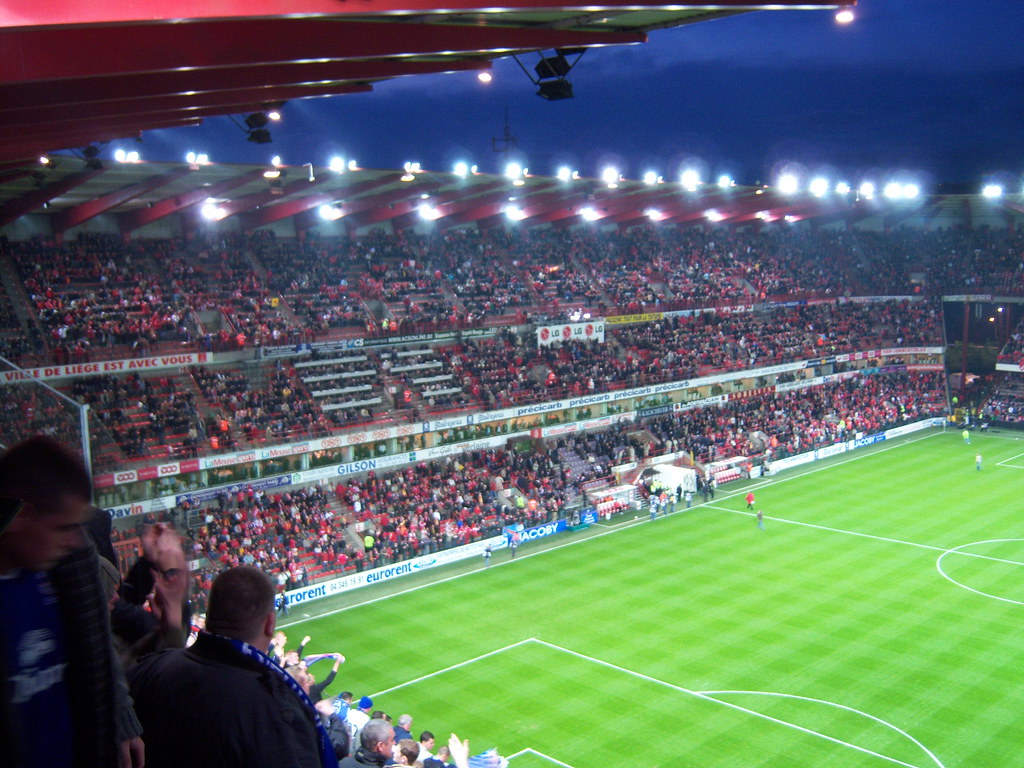 Tribune I pre kick off

Whereas my trip to Germany last year showed how other countries do the football watching experience better than we do, quite the opposite here. The ground itself and the facilities were awful, and whle there were plenty of decent Liege fans about, there were far too many idiots from both sides ruining things. Shame.
Stade Maurice Dufrasne Photos
Posted by Unknown at 04:47