I live in Wigan, so getting there has never been a problem for me, and it’s one of the reasons I ended up following Wigan on the side in the first place. When I was a teenager, it was less than £20 for both me and my cousin to jump the bus and go to the game. So of course, before I was old enough to start going away with Everton, Wigan provided a cheap and accessible cure to my football fix!
Old enough to drive now of course and have done for years. Never used to have a problem parking at Aldi and walking across, but once Wigan got into the Premiership, most of the local businesses on the retail parks stopped letting people park on them. Parking at the ground is an absolute no no given the price and how long you can sit in that one line of traffic trying to get out. I also found out to my cost that street parking in Newtown is not advised anymore since I had my car radio stolen…in other words, there aren’t many alternatives! There is parking at the cinema opposite the ground, which you can either pay a fiver for, or you can lie and tell them you’re going to the pictures and park for free on the other side! Or park where I do, at a social club on Scot Lane behind the police station for a quid, or on the street there for free! Takes a little while getting out, or you can go the long way around but get there a lot quicker heading back through Norley but its safe enough and not that far to walk. 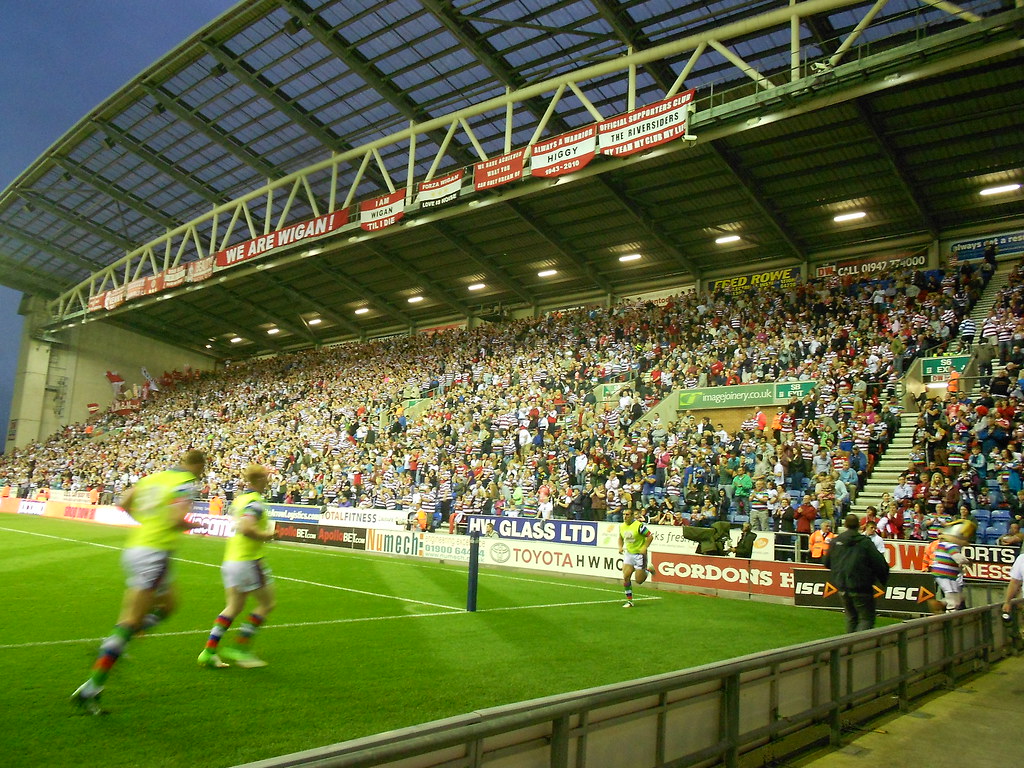 The South Stand for a Super League game against local rivals St Helens, 2012

Wigan is famous for pies…and not without good reason! It is the undoubted highlight of Wigan away…the chunky steak pie! Cheap, just solid meat, pastry, gravy, absolute pie perfection! Never needed to eat anywhere else at Wigan, though being retail park based, there is of course the obligatory Pizza Hut/ Burger King/ Frankie & Benny’s and McDonalds a bit further away.
It’s not that bad for getting a drink either as far as other retail park grounds go. There is a fans bar inside the sports centre opposite the ground, which I used to go in while I still went to Wigan games as a home fan, and both Frankie & Benny’s and the Indian takeaway next door also let fans in to drink on matchdays. The Red Robin is the away fans pub and does decent 2 for 1 on food, and there is also an away fans bar under the North Stand. 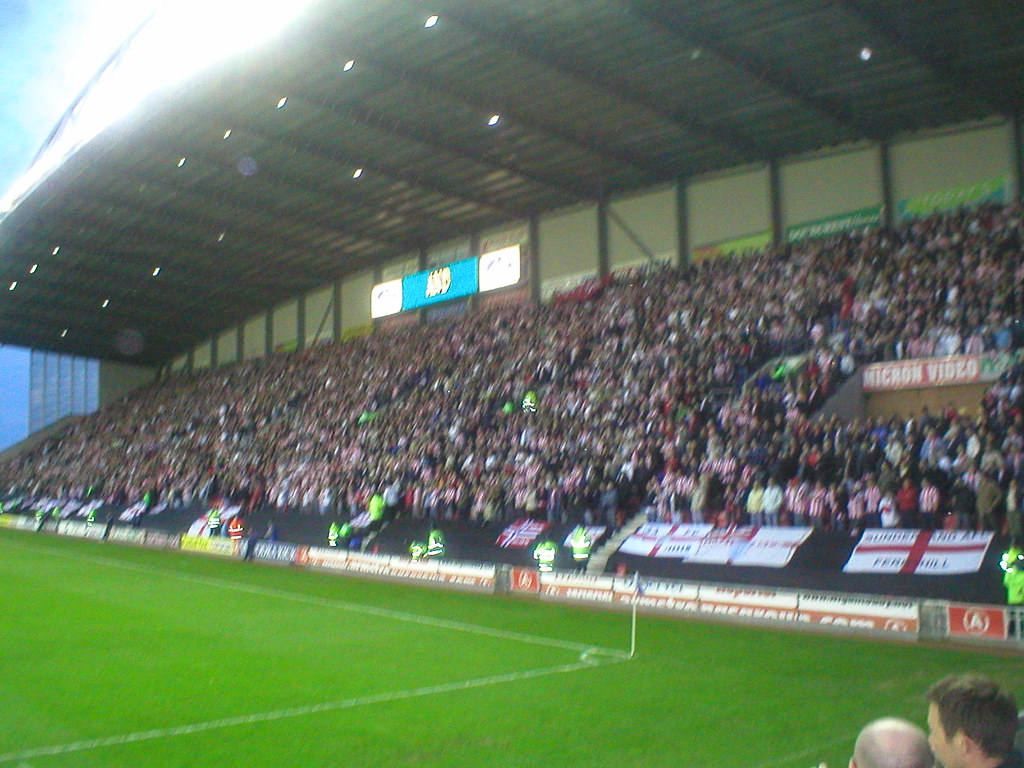 Approximately 7,000 Sunderland fans, for a big promotion game. Before away fans were moved to the North Stand, 2005

For a new ground, a let down. It’s not big enough inside, any kind of away following and you will really struggle to move about, the central blocks of the away end in particular get really uncomfortably crowded, and that is not helped by police and stewards complicating things, getting in the way and now not allowing you to come out in a different block and walk across the walkway at the front of the stand…that would be too much like common sense, a human crush is far more preferable! 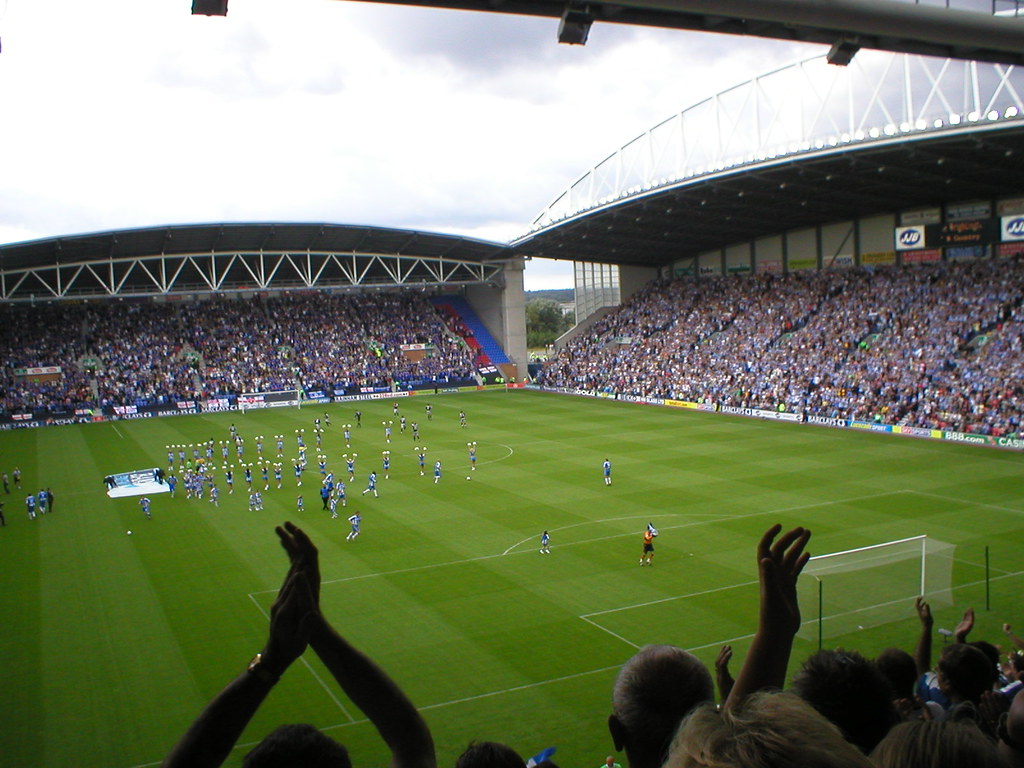 The teams run out for Wigan's first ever Premier League match against Chelsea, 2005

Surprisingly, I think it has got worse since promotion despite the crowds doubling. When I used to go in Division Two and the Championship, the ‘singers’ all went in the South Stand, the North Stand was the family stand, and the East was for away fans. Now of course it makes sense not to give away fans in the Premiership 8,000 tickets, but they should have looked into splitting the East Stand, rather than split everybody up. The South is now the family stand, but some of the singers have now moved to the north corner of the East Stand next to the away end but it just isn’t the same. The heart of the support has all been moved around, and the atmosphere just doesn’t seem to be what it used to be. It was never the best before either, especially with the away fans being so far away, but there was always a decent atmosphere in the South. Getting rid of unreserved seating has probably contributed to it too. It seems to be picking up again in the North corner of the East Stand, its been excellent on my last few visits, despite smaller crowds.
For the rugby, it varied on my visits. Smallish crowds against the likes of Bradford, Castleford and Crusaders and very little atmosphere, to a near full house for a Derby with Saints where it was excellent. I suppose that sums it up, it can be brilliant for the bigger games, but not so good for the smaller ones. 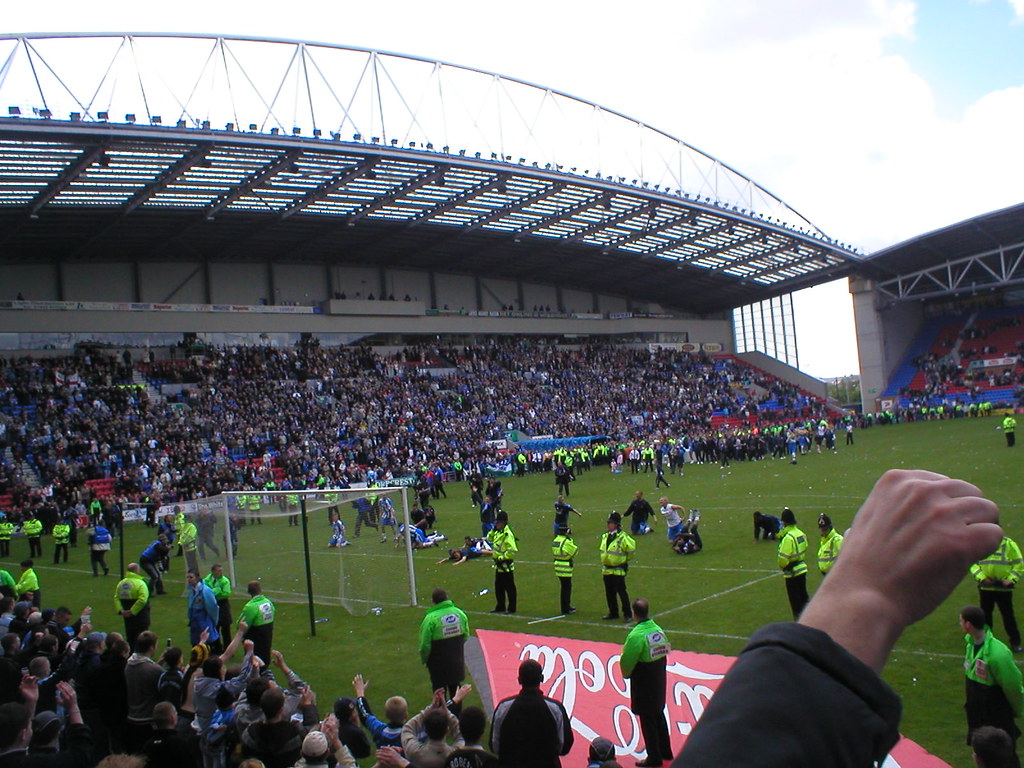 Celebrating promotion to the Premier League against Reading, 2005

Wigan have by far the best pre-match music around, playing all the old Northern Soul stuff. What other ground plays the likes of the Four Seasons, the Elgins etc before kick off? 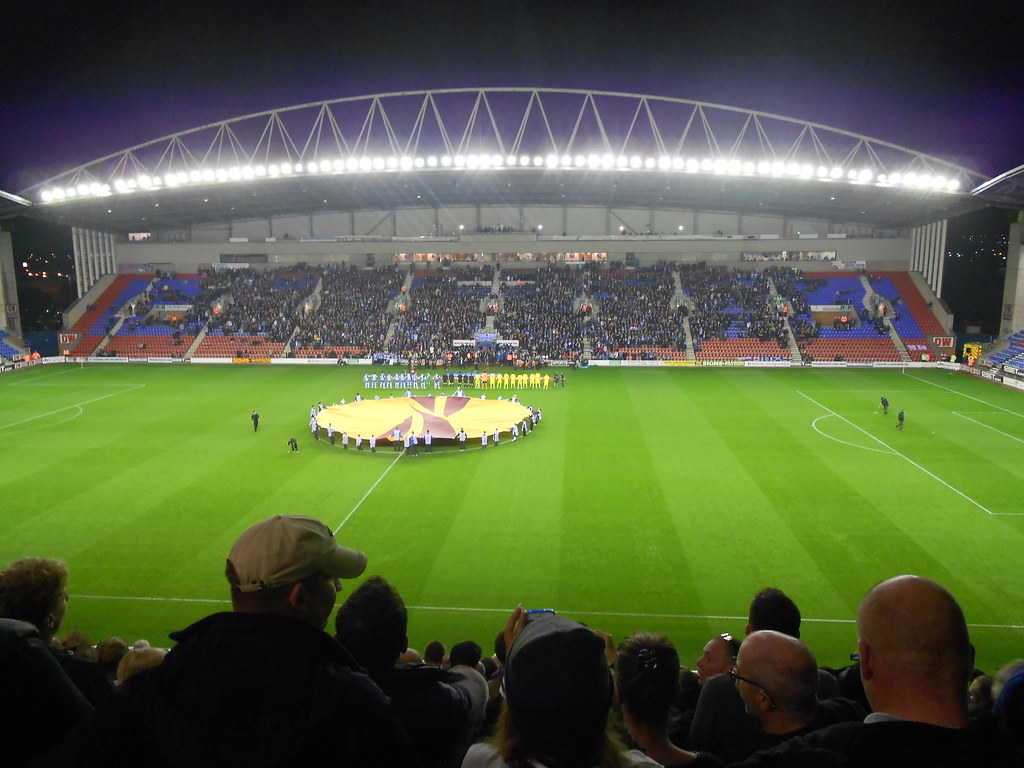 I’m not a fan of newer grounds. The fact that Wigan share with the rugby team too means that they aren’t really allowed to imprint their own identity on the place with stand names etc. (Though that has been improved recently with the renaming of the Springfield and Boston Stands) It’s a trip that will always be special to me because of where I live and my connections and history, but pretty much the same these days as Bolton, Boro, Derby etc.
DW Stadium (Wigan Athletic/ Wigan Warriors) Photos
Posted by Unknown at 04:20