Went with a club package, so was bussed around from the airport and city centre to the ground. 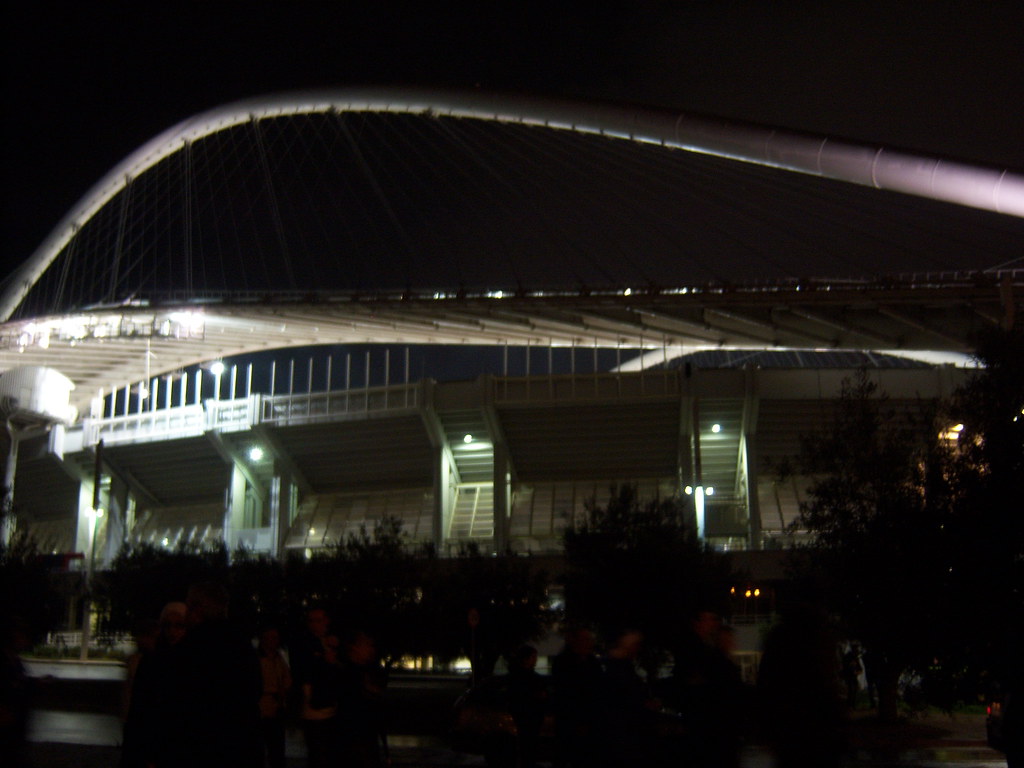 Wouldn’t have a clue what’s around the ground…we spent the day in the city centre, and when we were bussed to the ground, we were escorted straight in by riot police, and had nothing to do for an hour and a half…lovely. The city is fantastic, as is the food…mmm..souvlaki! The city itself is strange, in the sense that it so grand, and you’re walking down an ordinary shopping street, but surrounded by ancient monuments!

From the seated area, it certainly looks stunning (though half the away end being uncovered isn’t exactly fun when we had various spells of torrential rain…) but it is ridiculous how little UEFA care about ground standards and safety. England cleaned up it’s act after Heysel and Hillsborough, the mistakes of the past meant we were forced to bring our grounds up to date, and we are now at least safe to attend a football match. Even after the problems posed by Liverpool fans at the Champions League Final here in 2007, there are still no turnstiles, its all about police checkpoints, sitting wherever you like, no toilets, just a line of portaloos! Only one food outlet, and you had to go through a police checkpoint again just to reach it and to get back to your seat, a problem that can be easily solved by hmm…turnstiles! You do have to wonder how deluded UEFA really are when they deem this ground worthy of the honour of hosting a CL Final, and Cardiff’s Millennium Stadium, not. The view from the away end was at least flawless, even if we were a bit far away thanks to the running track. The police were a pain in the backside. Left us alone while the game was on, but a pain by all account whenever someone wanted to use the toilet or food for the reasons pointed out above. Also insisted on keeping us behind for 20 minutes and making sure we did so in the seated area, so if you needed the loo, you were screwed! Also more concerned with making sure were behaving ourselves and not allowed to move about, rather than keeping an eye on what the home fans were up to. There were flares, missiles on the pitch, fans climbing over the fences to steal flags and put their banners up, and of course, the usual flag burning antics (or attempted ones…clearly there is a good reason why all flags in this country must be fire retardant! It was quite funny seeing their 6th or 7th attempt at flag burning fail, and the whole away end singing ‘You can’t start a fire!’) 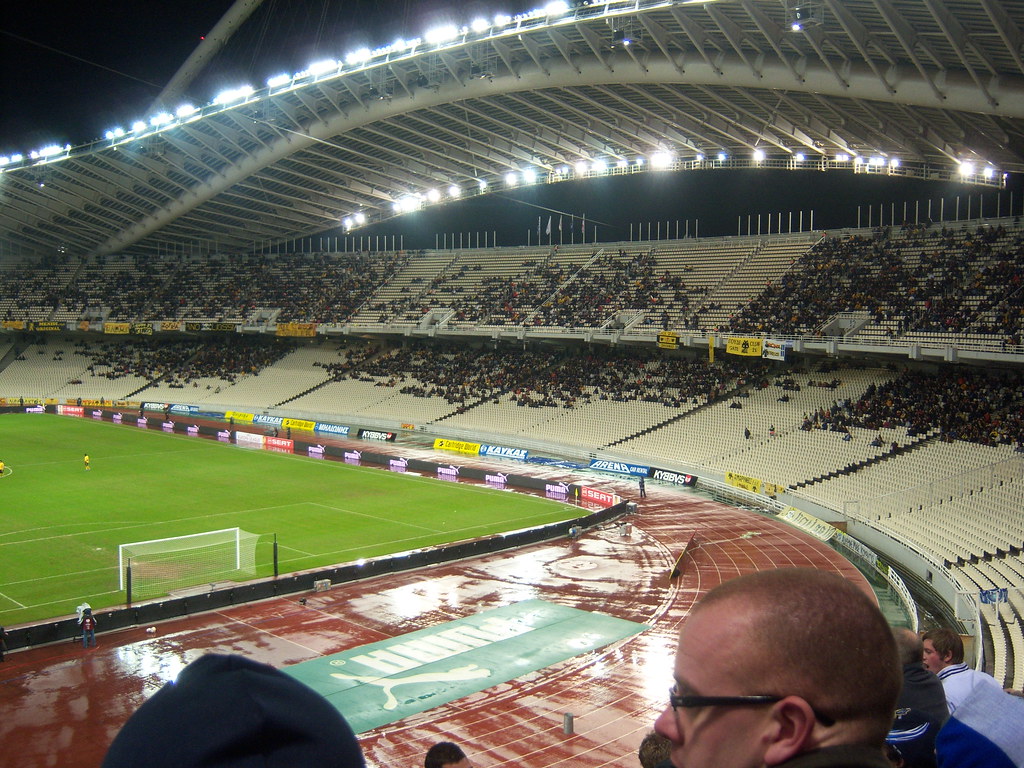 The very sparsely populated side stand...

15,000 fans in a 71,000 capacity stadium…what do you think? Wasn’t so much down to either set of fans, we were both pretty constant all night, but while they were dispersed all over the place, the atmosphere was never going to be anything other than hollow from them. 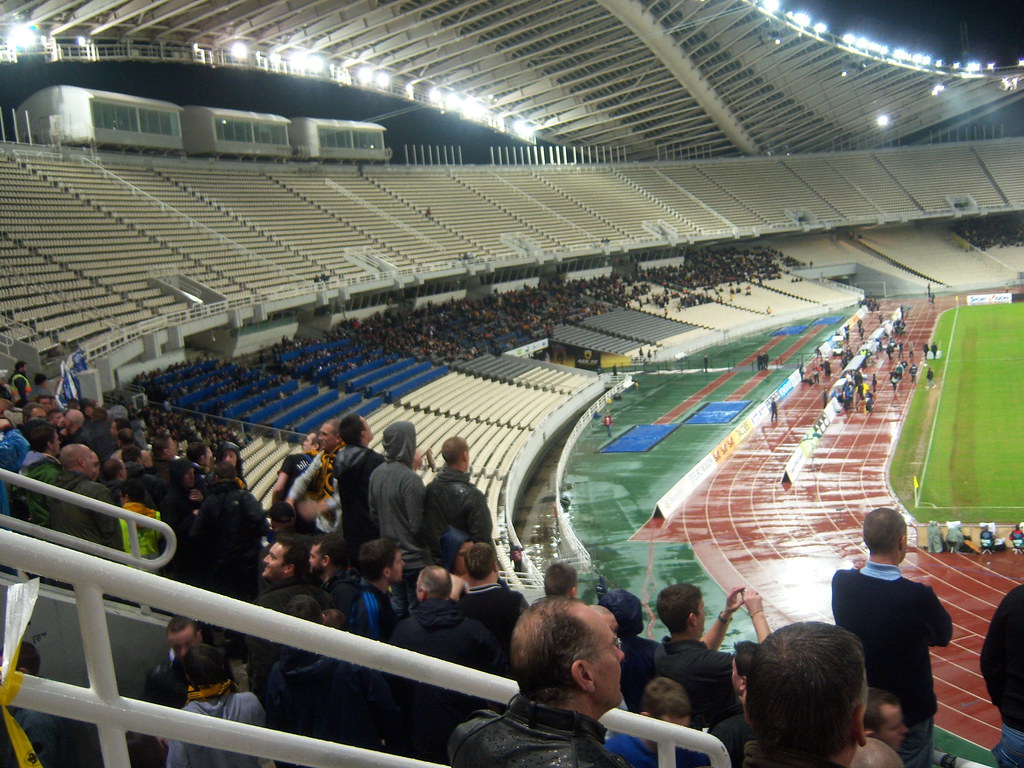 The even emptier main stand side 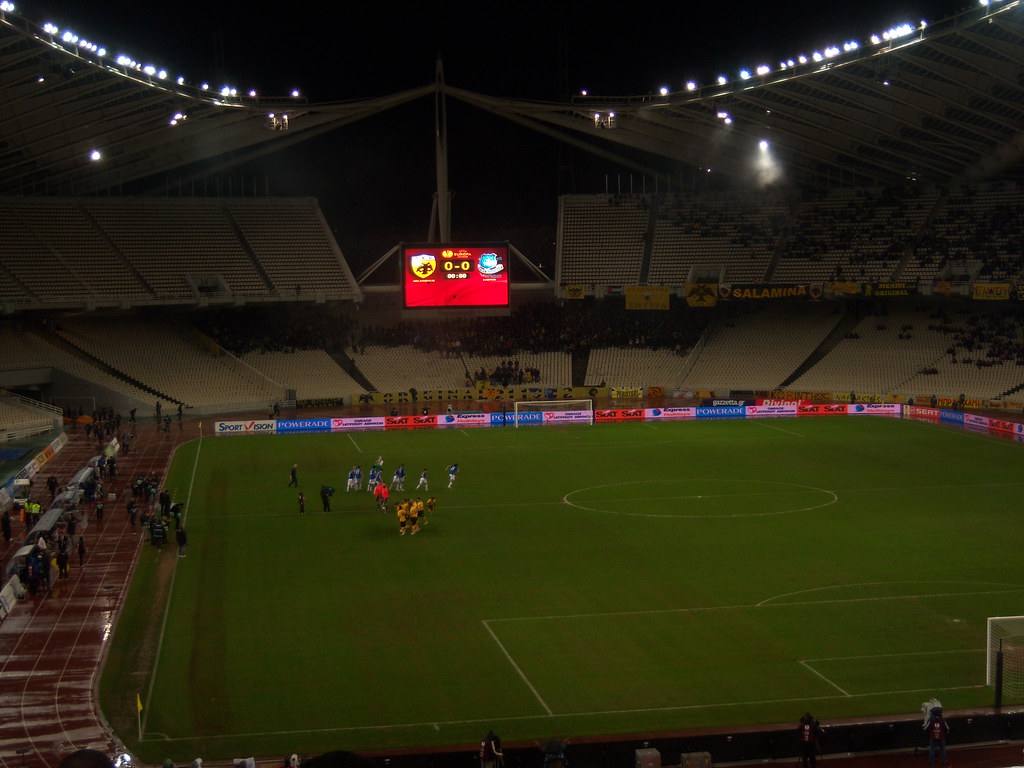 The Athens ultras behind the goal

The city itself is well worth a visit. The ground…not so much. Getting in and out of the ground was a very unpleasant experience all round and spoiled an otherwise excellent 24 hours.
OACA Spyros Louis Photos
Posted by Unknown at 07:23