In terms of parking, one of the best Ive been to. A couple of big pay car parks at Millmoor and Liquid, but also a ton of street parking. Took next to no time escaping either, I parked in the street next the Prince of Wales pub near Millmoor, and was back on the motorway and gone within 10 minutes.  Not a single signpost from the M1 though which would make it difficult for anyone without a SatNav. 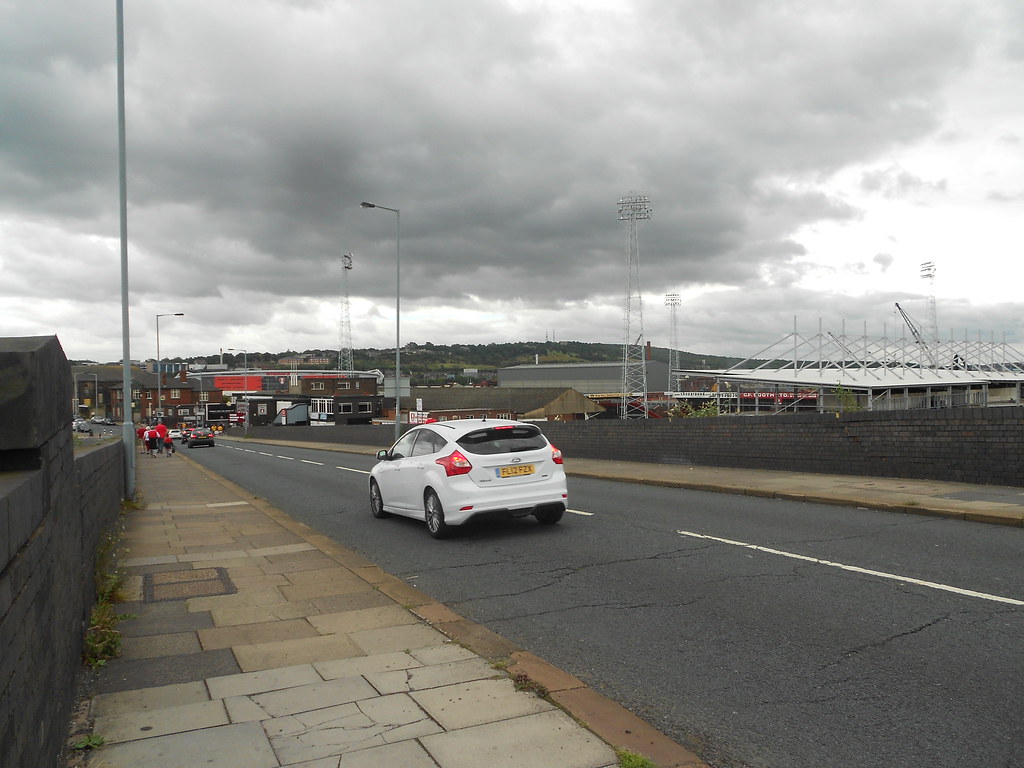 Past and future, Millmoor in the foreground, the New York Stadium in the background

They have Pukka Pies, but not the chicken & mushroom? Whats that all about? Couple of decent sized pubs on the way from Millmoor to the ground, including Liquid where you can park as well, and loads of shops down the main road between the grounds, so plenty outside. 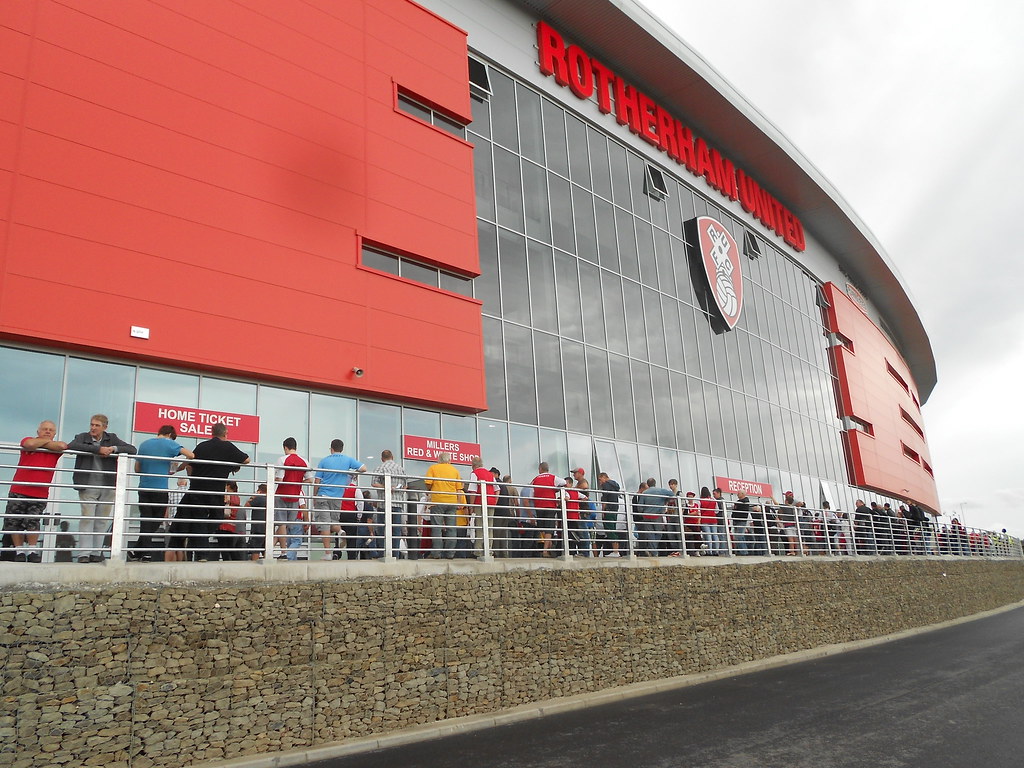 The seated area is probably one of the best of any of these new grounds, the steps are very steep, so even only a few rows back as I was, it was high enough the view was flawless. Several other little flaws though, the turnstiles being numbered wrong on the ticket for a start, then just the one turnstile open, and a TV showing the game right in front of it meaning a bit of congestion created when it could easily have been avoided. Two food kiosks in a fairly small concourse though, so that was a plus, as most smaller away ends just have the one. On the outside though, nothing too special, a small red Cardiff. Club shop was disappointing too, no badges, and as I overheard a few fans complaining about, no prices on anything which put a lot of people off buying anything. 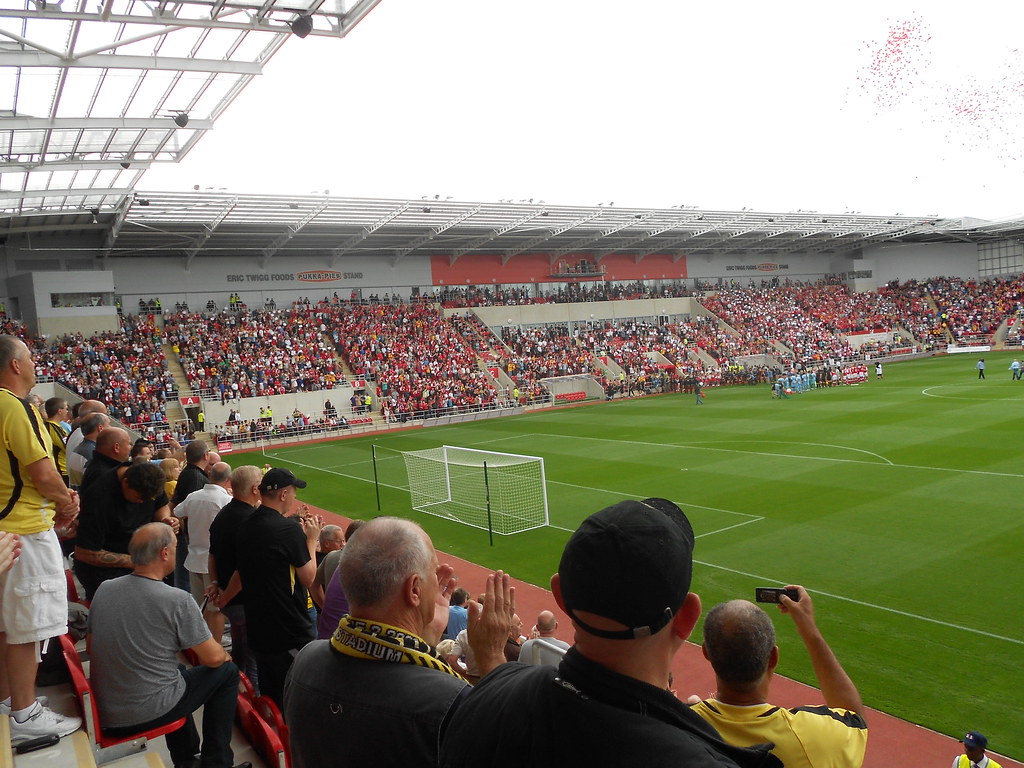 Teams line up in front of the Main Stand

Disappointing. Considering it was such a huge day for Rotherham finally being back playing in their own town, the atmosphere was really poor until Rotherham went 3-0 up, and then when they did get going, it was mostly terrible cringeworthy chants like ‘East Stand give us a song.’ That and singing songs in support of Steve Evans, which is never good…much preferred Burton’s renditions of ‘you’re supposed to be in jail, you fat Scottish b*stard’ and ‘Stand up if you hate Steve Evans…’ 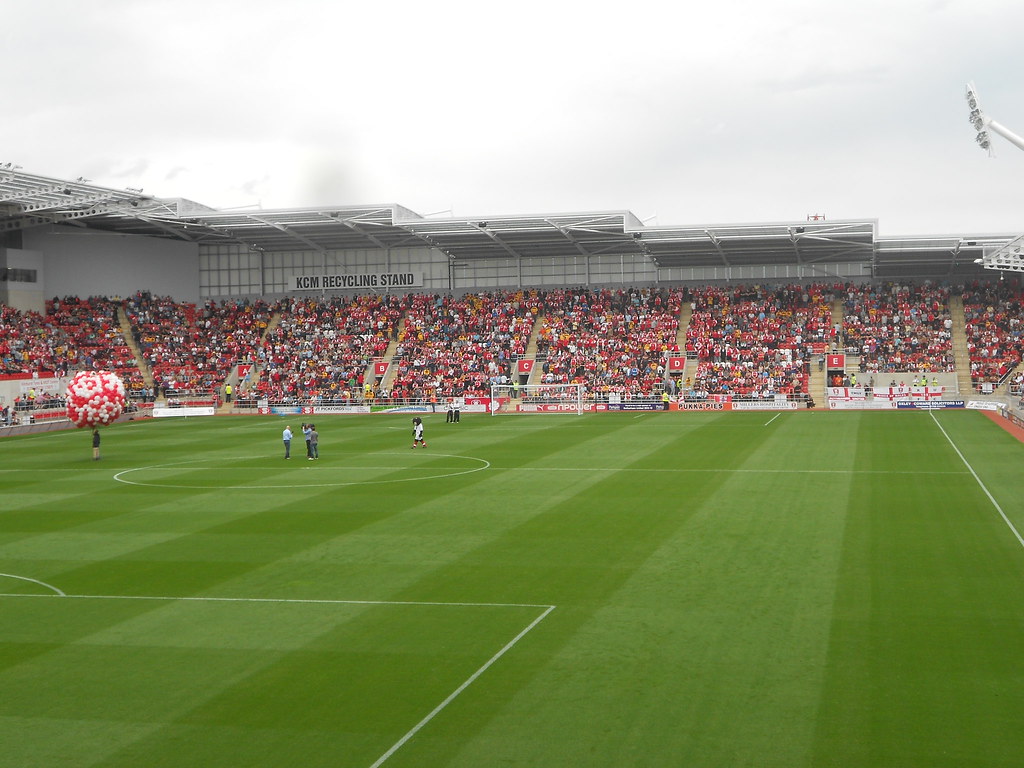 Rotherham fans in the North Stand

Possibly the most pointless bit of post match policing ever…nobody was allowed to walk around the back of the East Stand from the South side of the stadium, so we were all sent back, not allowed to walk along the front of the West Stand, but forced to walk on a little path low down in front of the walkway in front of the West Stand, while all the Rotherham fans sat in the West were walking on that walkway above us…if this sounds silly and complicated, it was made even sillier and more complicated by the fact the South Stand was split with both sets of fans on this day, so it wasnt even just a case of separating the home and away fans, as the home fans in the South Stand had to walk down with the away fans! If they ever have a bit of a dodgy game here, trouble is bound to kick off there, especially as the two sets of fans will be separated by nothing but height, and that would be easy to negotiate if a few scallies wanted a fight! 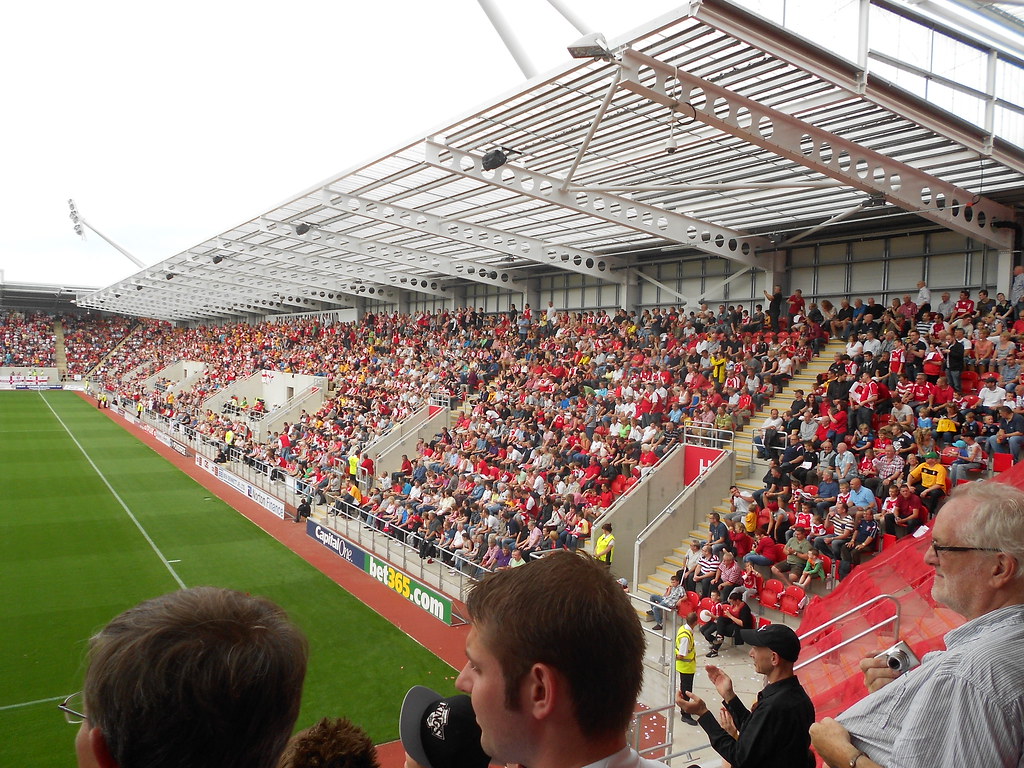 Like a lot of new grounds, a little dull on the inside, and a disappointing atmosphere, but with it being so close to the old ground, it has everything in place around the ground, meaning it is still a good away day.
New York Stadium/ Millmoor Photos
Posted by Unknown at 13:57