I was given a good parking tip, given that there are a lot of parking restrictions around the ground on matchdays with it being almost completely hemmed in by houses. A little road called Pittville Lawn just off Wellington Road, which intersects Prestbury Road where the ground is, and its all free street parking. Also, by leaving at junction 9 of the M5 instead of 10, you manage to miss out the town centre. 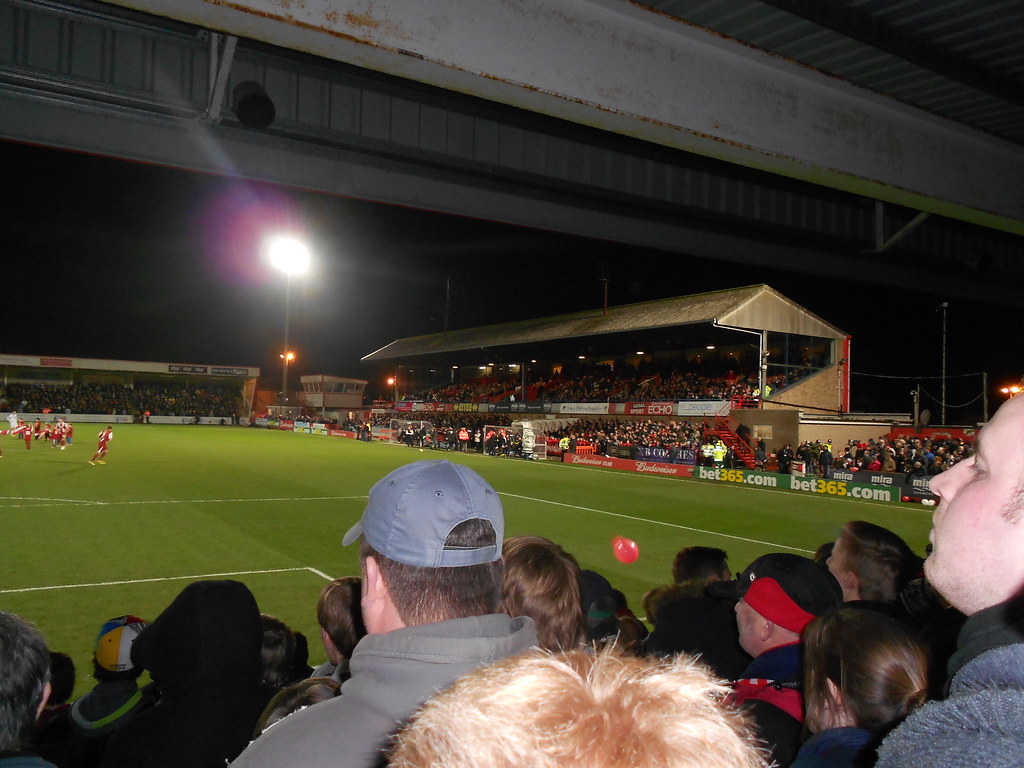 The Main Stand against Hereford, 2012

The ground’s immediate location is pretty poor really. I got to the ground very early having planned for traffic problems with it being for a Monday night game, and went off in search of food. The least you expect is the odd chippy or takeaway or burger van, but there was nothing. Found a pub on Prestbury Road called the Fox and Hounds which was empty, and a petrol station and corner shop, that was it really, nowhere selling any kind of hot food. Which forced me to eat inside the ground…which is always bad news, and the pretty rank burger I ended up with met every reason why I very rarely touch food inside a ground unless its something I know and trust! On my second visit, did a bit more research, and the other direction down Prestbury Road at least offers slightly more in the way of civilisation, including a pretty tasty pizza place, so I at least wasnt forced to eat in the ground! Good thing too really, as after they opened the turnstiles to let us in, they waited another half hour before opening the food kiosk! 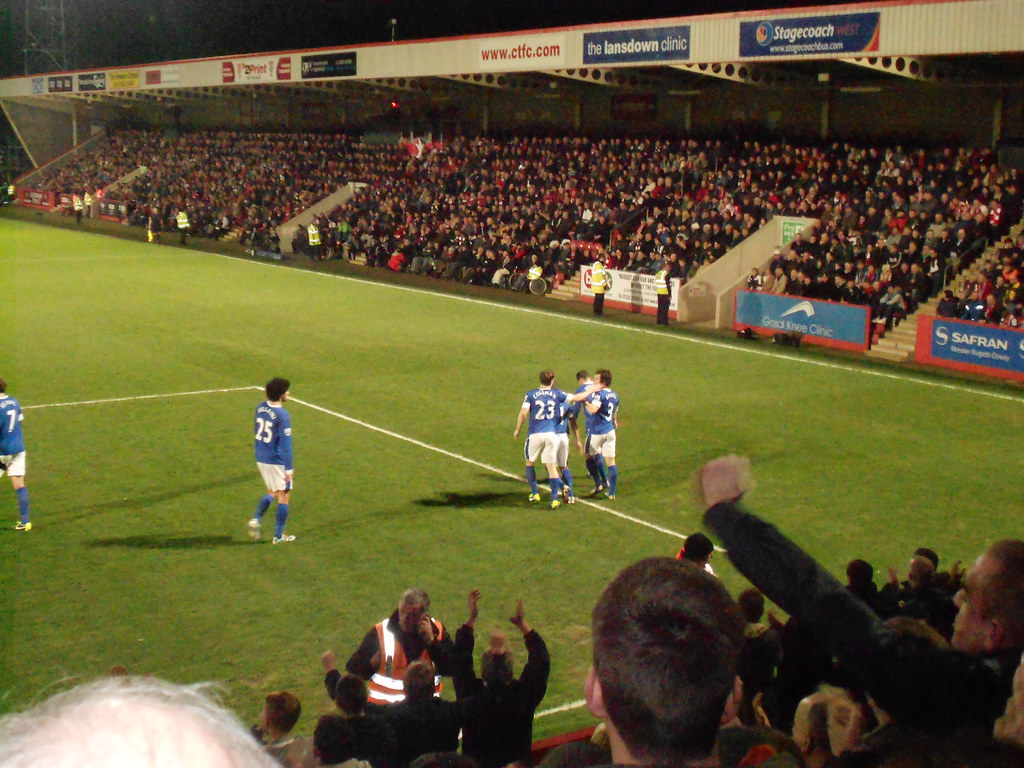 Blues players celebrate a goal in front of the Hazlewoods Stand, 2013

Despite being a League club for 13 years now, Whaddon Road still has a big non league vibe. I dont think Ive ever been in any ground where the stands are so close to the pitch. It has been redeveloped on two sides, with the In2Print and Hazlewood Stands now being all seated with flawless views, the Prestbury Road Terrace was renovated during Cheltenham’s League history, and the old Main Stand is the old in the ground. 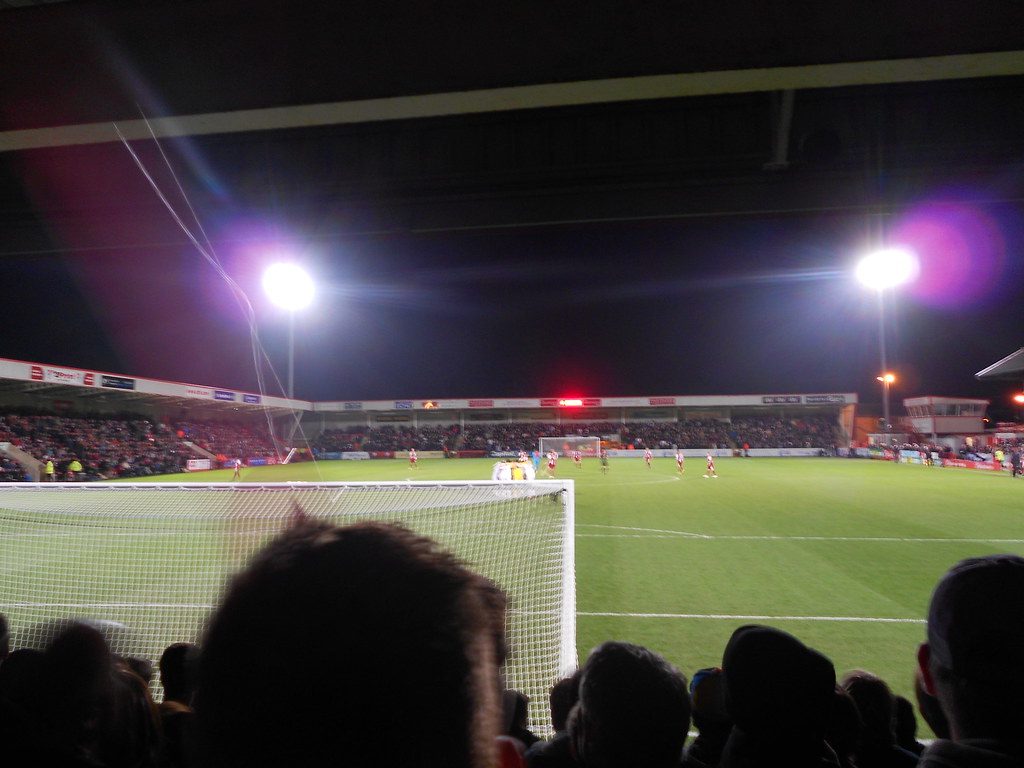 Hereford fans in the In2Print and Hazlewoods Stands, 2012

To be fair, it was excellent for most of the game. The game had a huge amount riding on it with the winners of the tie facing a home game with my own lot next round, plus it being a fairly local game, so Hereford sold out their allocation of around 1,300. And in the terrace from the home fans, the atmosphere was pretty incessant until late in the game, when the Cheltenham fans seemed to get a bit restless and impatient at their side’s failures. Ironically, it was poorer for the Everton game, with the bigger crowd, even before we led. 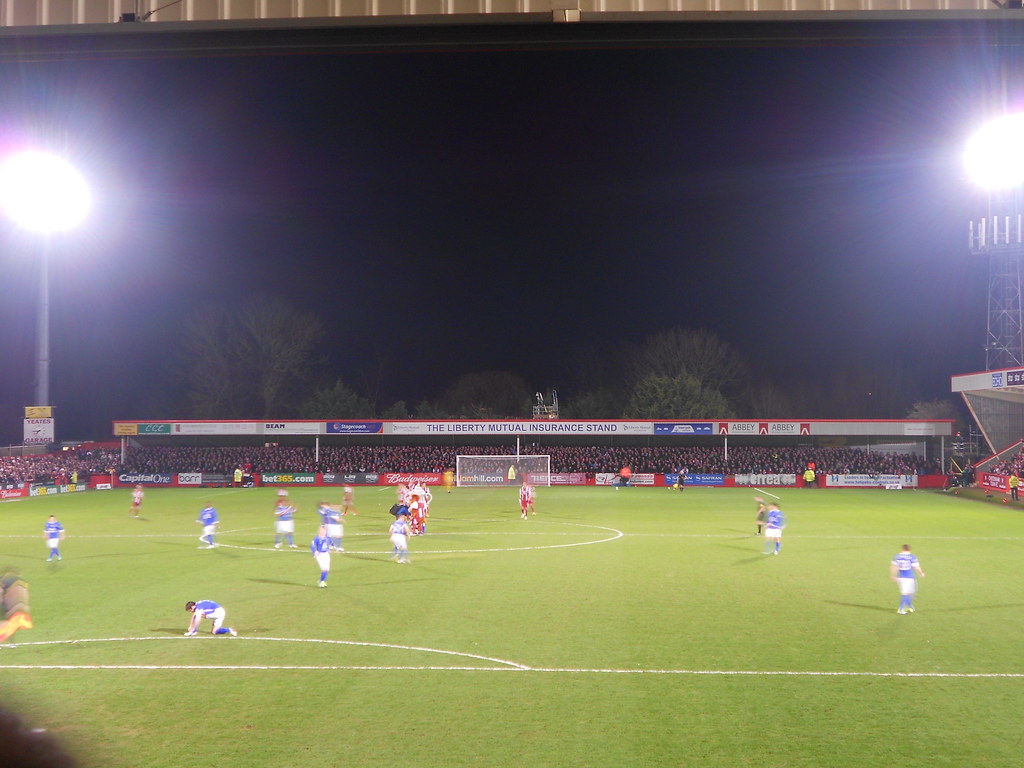 Not a whole amount going for it other than a really good atmosphere. Nothing personal, but Id have been happier visiting Hereford after the replay rather than here again!
Whaddon Road Photos
Posted by Unknown at 14:35